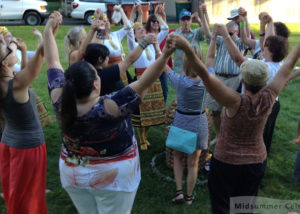 I took my daughter to hear Taylor Swift the other week. The biggest surprise from the experience (other than the mere fact of me going) was how good I felt the next day. While parts of the whole experience felt so foreign to me, in the joyful after glow I realized something very old had happened.

Barbara Ehrenreich coined the term “collective joy” to describe group events which involve music, synchronized movement, costumes, and a feeling of loss of self. Throughout human history collective joy has asserted itself – through dancing, festivals like Carnival, and Ehrenreich suggests most recently through sporting events. Many aspects of collective joy were present as I stood screaming the lyrics with a sea of people, many of whom were dressed in outfits from various Taylor Swift music videos.

These days we are generally starved for collective joy. In her book Dancing in the Streets, a History of Collective Joy, Ehrenreich brilliantly chronicles how powerful elements in society gradually subdue collective joyful events by converting participants into spectators. This conversion drains the events of their power to heal and transform. Yet despite all efforts to control it, joy continues to spontaneously reassert itself through history in new forms.

I’m particularly struck by Ehrenreich’s chapter “An Epidemic of Melancholy” in which she explores possible correlations between the suppression of public festivals and the rise of depression in the 1600s – continuing into today. She asks if the disappearance of traditional festivities contributed to the rise of melancholy. At the very least, people had lost a potentially effective cure for depression when they abandoned their festivals.

Similarly, at a certain monastery in France in the 1960’s over 75% of the monks grew severely depressed and lethargic when the new abbot eliminated their chanting for more “productive” endeavors. When Dr. Alfred Tomatis was called in to assist he directed all the monks to resume chanting. All the monks soon returned to full health.

We are given so many guidelines for our health: ways we should exercise and dietary guidelines. More and more people are embracing the benefits of even a short meditation in the day. When was the last time that a doctor suggested you to make sure you regularly experience collective joy?

Marketers certainly want to sell you joy. The hunger for belonging and joy is perhaps what fuels so much of our consumerism. But buying joy is not the same as collectively creating it.

Collective joy is like an atrophied muscle for most of us. I grew up downright suspicious of anything that involved getting caught up in a large group. How would I know the group was safe and not degenerating to mob mentality? These worries came up even around the Taylor Swift concert – having a whole stadium of people scream-singing “Look what you made me do” is not really moving us towards more mutuality and positive civil discourse.

In her book, Ehrenreich points out that while collective joy is marked by a certain kind of ecstasy, it is always supported by a clear set of cultural protocols. The music, dance steps, and social rules create the container for healing dance rituals. It was almost by accident that I stumbled into a dance form (and teacher!) that I trusted to hold me. I’ve been studying, practicing and sharing Laura Shannon’s research on women’s traditional dances ever since.

As you settle into your fall rhythm, will you be regularly nourished by collective joy? Can you imagine what that might feel like?

Join the Wisdom Dances dance practice any week. We are based in Laura Shannon’s research on traditional dances as tools for healing and transformation.

A Festival Day to Honor the Lives that Support Us

The All Souls Dance Retreat is October 28 – a deeper dive into the healing power of traditional dances, accompanied by live music. No experience necessary. Learn more.